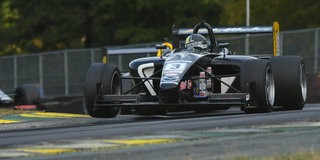 ALTON, Va. (October 12, 2019) – In a heated last-lap battle to the finish, Flinn Lazier, of Vail, Colorado, fended off his K-Hill teammate Dario Cangialosi, of Chester, New Jersey, that left Cangialosi rattled and in the grass as Lazier crossed the stripe first in Formula Atlantic (FA) for back-to-back SCCA Runoffs victories. Cangialosi made a quick recovery to finish second, while Spencer Brockman took third at Virginia International Raceway (VIR) on Saturday.

“Today was wild and super unpredictable,” said Lazier. “The surface we were playing on today was much different than the surface we were running on Thursday. We saw that going into turn one, and again down the back straight. I was struggling with a little bit of understeer and just trying to hold my own. We really only made one mistake that whole race and luckily I was able to recover from that one pretty well. It was wickedly exciting and I gave it everything I had for the win.”

The series of Roller Coaster and Hog Pen turns were problematic for the entire FA field today. On lap two, Tire Rack Pole Award winner Cangialosi lost the lead to Lazier after going sideways into the Roller Coaster. Several laps later, Lazier got loose in the same spot, which allowed Cangialosi to make up ground. With Cangialosi glued to Lazier’s gearbox, the pair reeled off several fast laps until Cangialosi snatched the lead from Lazier with eight laps left in the session.

However, Cangialosi didn’t hold the lead for long. Challenging Lazier for position, Keith Grant, of Germantown, Tennessee, made a failed attempt to pass on the front straight, which ended up in his favor. Swinging back into Lazier’s slipstream, Grant pushed the third-generation racer to the inside of Cangialosi entering turn one. By the exit, Cangialosi was in third with the No. 3 Tivoli Lodge/Bell Helmets Mazda in first and Grant still in tow.

Experiencing mechanical issues, Cangialosi fell out of top-two contention before getting things sorted out. Chasing down the leaders, Cangialosi set a new track record with a fast lap of 1:44.107-seconds (previous record set in 2016 by Ryan Norman with a 1:44.332).

With two laps left in the race, Grant shunted off course exciting Hog Pen. Cangialosi reclaimed second, with his sights set on Lazier. On the final lap, Cangialosi and Lazier went side-by-side down the back straight through the Roller Coaster. In the No. 22 VSG Holdings/ Hoosier/K-Hill/ OVRP/MIR Mazda, Cangialosi suffered the same fate as Grant. Braking deep on Lazier’s outside, Cangialosi overshot Hog Pen, gifting the lead to Lazier as the turn claimed another victim. Cangialosi recovered for a solid second-place performance.

“I'm pretty sure there was oil on the track. It was a lot looser down into there than the previous days,” explained Cangialosi. “I'd get a good run on Flinn every other lap, I'd catch back up to him but then I'd have another mechanical issue and then I'd fall back. I was just trying to chase Flinn down to the end of the race. I closed down on the last lap, got right up to him on the back straightaway. I got to his left side before the braking zone and tried to go in there with all I could because it's the Runoffs. It was a 'if you're not first, you're last' mentality. Unfortunately, I didn't make the corner and went into the grass, but I was able to get it back on track and finish second.”

Today was a game of patience for Brockman. Watching the intense action unfold in front of him, Brockman waited for the right opportunity to pounce. As his stickered Hoosier Tires came to temperature, Brockman maintained a steady pace. Capitalizing on Grant’s late-race misfortune, Brockman claimed his third career Runoffs podium.

“It was a tough start,” said Brockman. “I didn't have a lot of heat in the tires, and I started out on a fresh set. The first three or four laps I was struggling to get some heat into them. Once I did, I was just trying to maintain a pace as best I could and see if any of the three up front made a mistake and fell off. With two laps to go, I came down to Turn 17 and saw a bunch of dust in the air. My engineer told me that Grant had gone off. Luckily, the patience and consistently paid off and I was able to grab third.”

Additionally, the Formula 1000 class ran alongside FA on Saturday. As the lone entrant, Pete Frost, of Douglasville, Georgia, in the No. 62 Phoenix F1k. 12 Suzuki finished first.

Live, online video coverage of Runoffs races, presented by Mazda, is available throughout the three days of competition at SCCA.com/live. An audio race call, supplied by the Super Tour Radio presented by Hoosier Racing Tire broadcast team, is also available at www.SCCA.com/live, as well as live timing and scoring for each National Championship race.