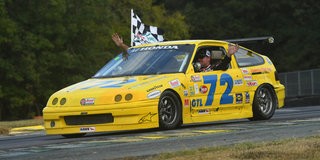 Shadowen’s No. 72 Road N Race Auto/Goodyear/HPD Honda CRX fell behind Bill Ball on the opening lap as a congested start and contact wiped out defending class champion Troy Ermish and 10-time champion Joe Huffaker, starting third and fourth. That brought out a full course caution on the opening lap, but Ball again ran off ahead on the lap three restart.

Ball, still leading, ran wide in Turn 10 on lap six and turned the lead over to Shadowen. From there, Shadowen stretched his lead to more than 20 seconds until the race ended under a final full course caution after 14 laps.

The championship is Shadowen’s third of his career, and his sixth career podium.

“It feels good,” Shadowen said. “It wasn’t as much of a battle as some of mine in the past, but it was a good race. If Bill had not gone off, it would have been a hell of a battle for the first place position. He got by me on the start, and I was happy to be there. I’m better in the chase. I was able to size him up in those couple of laps and he can throw that car around. I was hoping if I could pressure him a little bit, he would throw it around too much. That’s kind of what happened.”

Goodale also drove his No. 04 Mazda/Hoosier/Hawk/Summit Racing Mazda MX-5 past a slowing Ball on lap six to move into second place after being part of the contact in the opening corner. He nearly lost his second position on lap 12 when, entering Turn Two, he slid wide and off course. Goodale recovered, re-entering the course just in front of Fuller, and remaining in front until the full course caution came out. However, Goodale received a two-spot penalty after the race, ultimately finishing fourth.

Fuller started seventh, moved to fifth following the opening incident, and picked up an additional position on the lap three restart by moving around Ryan Downey’s Nissan 200SX SE-R. When Bell began to drop, on lap seven, Fuller had found his way to his first podium position.

“It’s amazing,” Fuller said. “I’ve been at this for five years and climbing up the class. I followed Downey into Turn One and I just had a better run. Coming up to Turn Two, I was right beside him and outbroke him into Turn Three. I never really slowed down and went right around him.”

Taz Harvey got the best of a long battle with Downey to finish third. Harvey’s finish and his 12th position on the grid also earned him the Sunoco Hard Charger award.

Live, online video coverage of Runoffs races, presented by Mazda, is available throughout the three days of competition at SCCA.com/live. An audio race call, supplied by the Super Tour Radio presented by Hoosier Racing Tire broadcast team, is also available at www.SCCA.com/live, as well as live timing and scoring for each National Championship race.