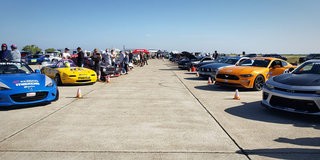 After a few weeks off, the Tire Rack SCCA Championship Tour resumed action this past weekend in Crows Landing, CA. Just a month ago, the site played host to the Tire Rack Crows Landing ProSolo® with many of the same competitors in attendance.

For most, it’s a challenge to be both an event official and a competitor. That wasn’t the case for Annie Gill as she handled Chief Steward responsibilities with grace while also setting the pace in D Street. Not only did she win the class by 1.493 second, she also finished 29th in overall PAX.

Street Touring Xtreme was the largest class of the weekend with 23 competitors and it was also one of the most fiercely competitive. Adrian Cardenas led out of the gate with Mack Tsang taking over on third runs, but it was Michael Carpenter with the speed after three runs on day one to take the lead. On Sunday, Carpenter set a blistering pace on his first run to hold the lead. While he wouldn’t be able to improve on it, it was still fastest of the day and he claimed victory by 0.774 second. Tsang finished second, 0.185 second ahead of Cardenas in third after the two continued to battle on day two. Alex Paraskevas, Erik Acks, Michael Yanase and Brandon Davis claimed the fourth through seventh place trophies.

On the Ladies side of STX, it was a tight battle amongst the six drivers for just two trophies. Catherine Tran had the speed out of the gate and continued to improve on each run, landing her in the top spot after Saturday competition with Kate Fisher just 0.734 second behind in second place. Despite some cone trouble, Youmna Zalzal was another 1.217 second back in third, just 0.032 second ahead of Eileen Blando in fourth. On Sunday, it was Fischer with the early speed that she was able to improve on. She took the win by 0.210 second over Tran in second. Both Zalzal and Blando struggled with cones on Sunday, hindering their ability to chase down the leaders.

If there were trophies for the most cones hit, G Street Drivers Chris and Pamela Kannan would take home the prize in their Ford Focus ST. Despite the cone carnage, Chris took the class lead on his third run on Saturday and didn’t look back. Brandon Osborne set the fastest time on day two, but had to settle for third, 0.746 second back from Howard Yang in the second and final trophy position.

The third Tire Rack CAM Challenge of the season drew 37 drivers across the three eligible classes. In CAM S, Karlton Lew put on a demanding performance on Saturday to take the lead. A cone on Sunday kept him from taking the fastest time (that honor went to David Rock,) but he held on to the class win with a 0.658-second margin of victory over Rock in second. Dan Bullis and Bryan Stewart claimed the third and fourth place trophies respectively. Lew went on to win the CAM Challenge bracket. In CAM C, it was Dennis Healy putting on a clinic in his Ford Mustang, taking the class win by 2.417 seconds over Steve Wynne. Todd Cameron, John Lawrence and James Boller claimed the third through fifth place trophies. In CAM T, Chad Ryker and Brian Hobaugh battled it out with each having faster times on each day. Hobaugh took the lead on day one, with Ryker finding the most time on day two, but Hobaugh’s lead was enough to hold onto the win by 0.463 second after the dust settled. Manual Ruiz and Michael Erickson clamed the third and fourth place trophies respectively.

The Tire Rack Championship Tour continues May 17-19 in Romulus, NY. The Tire Rack CAM Challenge will be back in action May 31-June 2 in Mineral Wells, TX. Learn more about these events here.