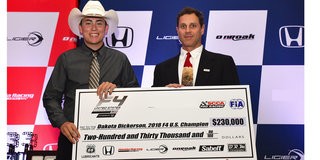 INDIANAPOLIS (Nov. 1, 2018) -- A year of great racing and championships were recognized at the season-end Formula 4 United States Championship Powered by Honda banquet in Austin, Texas. With a total of 16 top-10 finishes including four wins, Dakota Dickerson of San Diego was crowned the newest F4 U.S. champion and awarded a comprehensive F3 Americas scholarship valued at more than $230,000 to progress up SCCA Pro Racing’s open-wheel championship ladder.

The scholarship included:
- $25,000 cash prize from Phillip’s 66 to use on F3 Americas racing expenses
- One-year lease on a Ligier JS F3 chassis from Onroak Automotive North America
- One-year lease on the Honda Civic Type R engine from Honda Performance Development
- Two sets of tires per race weekend from Hankook Tire America
- Paid entries to all F3 Americas events and tests from SCCA Pro Racing
- Marketing package for the 2019 season from SCCA Pro Racing
- A full co-branded suit kit which includes a custom-fit suit, shoes, gloves and Nomex with a carrying bag from Sabelt
- A custom champion’s watch from BRM Chronographes

The 2018 F4 U.S. National Champion also received an invitation to the annual FIA Prize-Giving ceremony, uniting champions from every major disciple of motorsport including Formula 1 together to receive their official FIA awards during a unique star-studded gala evening.

"It is great to be able to grab the 2018 F4 U.S. Championship after all the hard work that DC Autosport and I put into the season” said Dickerson, who also broke the record for most consecutive top-10 finishes in F4 at 25."Iam very thankful for Onroak, Honda, Phillips 66 and SCCA Pro Racing for the opportunity to showcase what I can do. Their scholarship will help our season get started in the F3 Americas Championship and I'm looking forward to being able to experience the bigger Ligier Chassis and the Honda Civic Type R powerplant."

In addition to the scholarship and gala invitation, Dickerson was presented with the Cameron Das Pole Position Award presented by Worldeye. Dickerson collected four fast-lap times and five poles, the most of any F4 U.S. competitor this season. His consistent speed throughout the year earned him the award and the $2,000 end-of-season contingency prize from Worldeye. Inaugural champion Cameron Das still holds the record for most fast laps and poles set in an F4 season.

“Cameron is a great driver and it was an honor to be recognized by Worldeye,” said Dickerson. “The DC Autosport with Cape Motorsports team had an outstanding year with poles and fast laps. We came on strong in the last few rounds of the season, and I know if there is the opportunity to work together next year, we will pick up right where we left off — winning.”

Raven claimed seven podium finishes, including a win, along with an additional eight top-10 placements during his first F4 U.S. season.

“Not only were we second in the championship, I was also the Rookie Champion,” said Raven. “A massive thanks to DEForce Racing and everyone for the support all year.”

Christian Rasmussen of Copenhagen, Denmark, rounded out the championship podium in third. Battling four other competitors for the last championship title, Rasmussen’s final drive in the F4 U.S. session at Circuit of the Americas boosted him to the championship podium. Piloting under the red, white, blue and black colors of Jay Howard Driver Development, Rasmussen earned the most wins of any F4 U.S. driver this season with five.

“Thank you to F4 U.S. and all of its series sponsors Honda, HPD, SCCA Pro Racing, Onroak Automotive, Phillips 66 and Ligier for providing a great platform for young races to prove their skills in front of the right people. Also, a huge thanks to the whole Jay Howard Driver Development team,” Rasmussen said. “The COTA race was the last race of the season, but 2019 has already begun.”

Drivers placing fourth through 10th place were also acknowledged and awarded with cash prizes. The top-10 represented six different countries and six of the 10 were rookies.

“Arthur Leist has worked very hard to move up the ladder in this championship and we were proud to present him with the Most Improved Driver Award. It’s his first year out of karting and in fact, until preparing for this year, he had not actually even tested a single seater race car,” said Catherine Crawford. “He had nine straight top-10 finishes, two podiums, one at Pittsburgh, where he also had the fastest lap of the race, and backed up that performance at New Jersey with another third-place finish. Most impressively, he improved his average starting position from 21st at the beginning of the year, climbing all the way to fifth. Crosslink/Kiwi Motorsport has done a wonderful job of teaching, encouraging and helping this young man on his motorsport journey.”

The F4 U.S. Championship team title was determined by the team that scored the highest number of points during the season. Points were assigned based on the results from the top-two highest placing cars for each team at each event.

The FIA Super License is a qualification allowing the license-holder to compete in the Formula One World Championship. The license is issued to drivers who have met the FIA criteria of success in the junior motorsport categories. A competitor must obtain 40 points within a three-year period to apply for a Super License. Dickerson, the points’ champion, received 12 Super License points. Subsequent positions earned between 10 and one point depending on their final placement.

About the SCCA Pro Racing F4 U.S. Championship:
FIA F4 is designed as entry-level open-wheel racing for participants, around a contemporary, modern, cost conscious formula. SCCA Pro Racing and its chosen partners that embrace these ideals and support this vision with appropriate technology and products. The selected F4 powerplant is a production-based engine powering the Honda Civic® Type R®, tuned to meet FIA-mandated output of approximately 160 Hp. The engine and the ECU are sealed to provide parity and compliance. The Ligier JS F4 16 carbon fiber chassis is manufactured in the United States by Onroak Automotive North America. From the Hankook Tires, the Honda engine to the Ligier chassis, the F4 U.S. car is assembled and made in the United States.

About Hankook Tire America Corp.
Hankook Tire America Corp. is a growing leader in the U.S. tire market, leveraging investments in technology, manufacturing and marketing to deliver high-quality, reliable products that are safer for consumers and the environment. Headquartered in Nashville, Tennessee, Hankook America markets and distributes a complete line of high-performance and ultra-high-performance passenger tires, light truck and SUV tires as well as medium truck and bus tires in the United States. Hankook Tire America is a subsidiary of Hankook Tire Co., Ltd., a Forbes Global 2000 company headquartered in Seoul, Korea, and led by President and CEO Hyun Bum Cho.