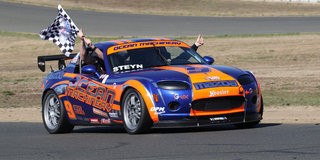 SONOMA, California (October 21, 2018) – Danny Steyn, from Fort Lauderdale, Florida, overcame a blown engine early in the week and utilized a risky tire strategy to lead flag-to-flag and win Super Touring® Lite (STL) at the 2018 SCCA® Runoffs® in the No. 9 Ocean Machinery/OPM/Nelson/G-Loc Mazda MX-5.

This was Steyn’s first Runoffs win after two podium finishes, and a special redemption after a heartbreaking 2017 result at Indianapolis Motor Speedway.

“I’m so fortunate to come and redeem myself here at a track that I’ve never been to,” Steyn said. “I had a feeling my car would be perfectly suited for this type of track. It’s twisty and windy and I do like to throw things around and I like the tail to drive the car.”

With that in mind, Steyn decided to take a risk and put softer “A” compound Hoosier tires on his Mazda instead of the more consistent “R” compound.

“I felt like I could get two hero laps out of them and I put enough of a dent between me and anyone else behind that they wouldn’t ever sniff on my tail,” Steyn said. “My idea was to break their back in the first two laps.”

“I tried to throw a tow strap onto Danny’s car so he could pull me around the track with him, but it didn’t pan out,” McHaffie said. “I’m not quite the cowboy, I guess.”

After four years of Honda/Acura domination in the class, it was a change to see two Mazdas up front. The 2014 Runoffs winner, Cliff Ira, was the highest representation for the H-emblem cars and drove his No.36 FIRA Motorsports/JMP Acura Integra to the final podium spot.

“To all my B-series (Honda engine) friends out there, we gave it all we had with that front-wheel drive car,” Ira said. “I was extremely loose early, and the car came in after four or five laps, but by then it was too late.”

Behind the top three, the battles for fourth through tenth were tight and not without tense moments. Thomas Lepper and Amy Mills both dropped out after contact during close racing, and when the flags fell, Tim Auger in the No. 07 Wowsmiles.com/Augersmiles.com Acura Integra finished fourth and Ken Kannard filled out the top five in his No. 51 Northwest Cable/Hoosier Mazda Miata.

William Keeling won the Sunoco Hard Charger Award by starting 19th and finishing 14th in the No. 11 Mazda Miata.

Live, online video coverage of Runoffs races, presented by Mazda, is available throughout the three days of competition at SCCA.com/live. An audio race call, supplied by the Super Tour Radio broadcast team, is also available at www.SCCA.com/live , as well as live timing and scoring for each National Championship race.

Image: Danny Steyn drove away from the field to win the 2018 Super Touring Lite National Championships in the Ocean Machinery/OPM/Nelson/G-Loc Mazda MX-5.