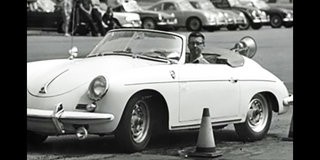 TOPEKA, Kan. (May 10, 2018) - The Kelly Cup was created in 2016 to annually recognize an SCCA® member who has shown extraordinary dedication and contribution to a Regional Solo® Events Program.  This year’s winner is Lloyd Loring of the South Bend Region.

A Sports Car Club of America member since the 1950s, Loring has experienced a little bit of everything the Club has to offer.  He has held several different offices within the South Bend Region, including co-chair of the Region’s Solo program.  He has participated in gymkhanas and road rallies, was once named Central Division Rally Driver of the Year, organized road races, worked Tech, and helped in Timing & Scoring.

But where Loring has left an indelible mark is in the Club’s Solo community. He was instrumental in putting on regional events where he’d skillfully manage timing and announcing duties. He became known as the “Voice of Solo” through such work, and became one of the first announcers for Solo Nationals. Many are familiar with Loring’s recognizable catchphrase -- “Are you ready for this!?” -- doled out when drivers make a spectacular run.

In recognition of his tireless efforts, the ‘Lloyd Loring and Jeanne Ruble Achievement Award’ was created and is given out during Great Lakes Solo Championships.  In 2013, Loring was inducted into the Central Division Hall of Fame.  In 2018, he received the Curt Thews Award bestowed upon South Bend Region members who have given unselfishly over the years. Brian Conners, Chairman of the Solo Events Board, also noted that Loring founded the Central Division Round Table, now known as the Great Lakes Roundtable.

“For years, Lloyd has been the first person on site at regional autocrosses, and the last one to pack up and leave the venue,” Conners said. “He is irreplaceable and well deserving of the Kelly Cup.  When our regions nominate their ‘irreplaceable,’ I am exceedingly pleased we have the ability to honor them.”

The Kelly Cup is named in honor of Pat and John Kelly for their tireless leadership efforts in developing a strong and sustainable Solo program in the San Francisco Region. Finalists for the award are chosen by Solo Development Coordinators from nominations submitted by the membership at large, with the recipient selected by the Solo Events Board.